Praveen Dubey is an Indian cricketer. He was born on 1 July 1993 in Azamgarh, Uttar Pradesh, India. He is right arm leg-break bowler and a right hand batsman. He has to shift to Karnataka from Uttar Pradesh because he never got any opportunity to play cricket at any level after his schooling.  He was bought by RCB earlier in year 2016 but never had any opportunity to play. But RCB has bought him again this year for IPL 2017. 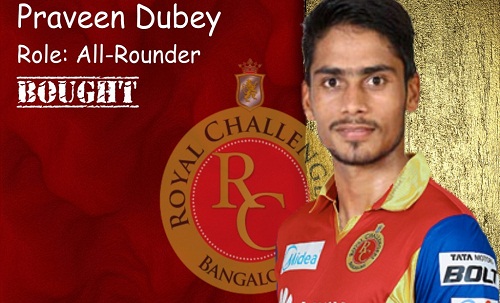 Praveen started playing cricket from his school days. He had played cricket at school level, from his school team. He is hard-working player, who loves to bowl hard-hitting batsmen head-on and try all his bowling tricks. He was part of KPL (Karntaka Premiere League) and his performance was excellent.  This season he is getting ready to play for Royal Challengers Bangalore one more time in the on-going IPL tournament.