Namitha is a well known film actress who is famous for her glamorous roles in South Indian films.. She got good publicity in Miss India Contest and she got various opportunities because of this publicity. Then Namitha did various TV commercials and also worked with big actors of South film industry like Mohanlal, Ravichandran, and Sarath Kumar etc. In Tamil version of Bigg Boss, she is going to participate as a contestant. She is going to add perfect glamour and hotness in this Indian TV reality show. There were only 14 contestants in this show, but at the last moment, Namitha Entered as a surprise entry in this show.

Career: She started her acting career with the Telugu film named Gemini but her movie Sreenu Vaitla was released first. In 2006, Namitha also made a debut in her first Bollywood film named “Love Ke Chakkar Mein”. With height of 1.83 m, Namitha is one of the tallest Bollywood and South Indian actresses.

Personal: She was born in Surat, Gujarat on 10th May 1981. She participated in Miss India contest in 2001 and later got her debut movie in 2002. In June 2012, Namitha also promoted awareness program of safe driving with Tamil actor Bharat. She has a hobby of dancing and also is a double black belt in Karate. In her other hobbies, she also loves to watch movies, love to swim and to play badminton. In Oct 2010, her fan attempted to arrest her in Trichy, Tamil Nadu. 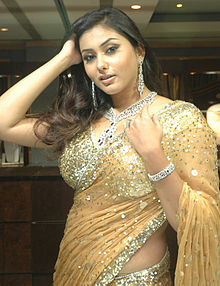