Nitin Nayak, is a 16 year old contestant, who have mesmerised the entire group with his beautiful and soulful voice, in the Live Reality TV show, ‘Rising Star’, aired on Colors TV. Nitin has scored 93% in the audition round, with his top-notch performance on the Bollywood song, ‘Kadi Aa Mil Sanwar Yaar’. He has captured the hearts of both the audience, who will be the judges of the show and expert panel, which includes Shankar Mahadevan, Monali Thakur and Diljit Dosanjh. 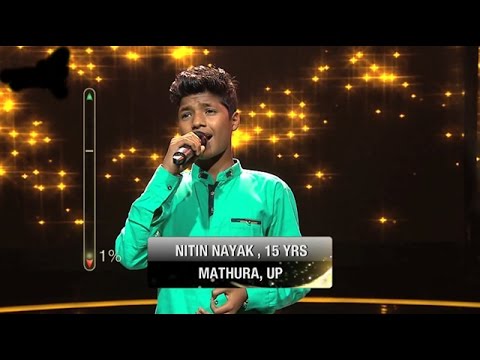 He has advanced to the Duels round, with a promising score of 93% and in that round, he contested against Ishrat Siddiqui and got a whooping 86%, for his performance of the song ‘Tere Bin Nahin, beating Ishrat. By this score, he proceeded to the next round which is ‘Red Sofa Elimination’ round, in this he sang ‘Yeh Honsla’ songs and impressed the judges and the audience and scored 79%.

‘Rising Star’ is a Live reality show, through which audience will be the judges for the contestants performance in the show. Audience will be able to cast their votes to their favourite singing talent, online through the mobile app. Their votes has maximum percentage in deciding if the contestant, passes through the next level. In addition to this, there is an expert panel, whose decision are also taken into consideration.

Even though, Nitin is a talented singer and proved his talent in the last three round and selected as one of the ‘Top 14’ contestant, we have to wait for the upcoming rounds to see if he secures the grand title.

We will update you with more personal details about the contestant. Please Stay Tuned!