Finally the wait is over, Baahubali: The Conclusion, Indian historic epic movie’s thunderous first look is out and the actor Prabhas fans are already going crazy. The first look is made in such a way that Prabhas makes a roaring entry with his perfectly chiselled muscular body and a chain wrapped around his left arm and wielding sword in his right arm. 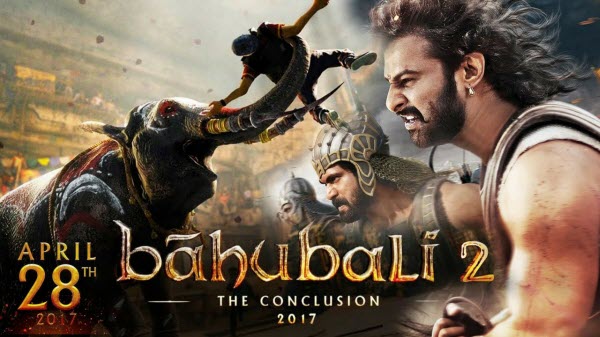 The first look of the movie was launched at the film festival in Mumbai ‘Mumbai Academy of Moving Image’ (MAMI), in which the movie’s Director S.S.Rajamouli and actors Prabhas, Tamannaah Bhatia, Rana Dagubatti participated. The bollywood stars Amitabh Bachchan and Aamir Khan were also present in the arena. The motion poster was launched around 4.45pm and received a standing ovation from

This big budget period movie is the much awaited movie of the year 2017 and gained its popularity from its prequel Baahubali: The Beginning. Prabhas plays dual role in this movie as Baahubali and his son Mahendra Baahubali. This movie is about a son seeking vengeance for his father’s murder and his mother’s captivity. He also wins back the throne of Mahishmati at the same time, this movie also depicts the victory of Mahendra Baahubali. This movie also unravels several unanswered secrets from the film’s prequel Baahubali: The Beginning. Mainly the brain bugging question for millions of fans ‘Why Kattappa killed Baahubali?’ will be answered in the sequel.

The film is already in the post-production phase and is all set to be released in the silver screen on 28th April, 2017.