Today We will Reveal Why Kattappa killed Baahubali.

Baahubali 2: The Conclusion has gained an unadulterated attention from the audience all over the world, following the grand success of its prequel Baahubali: The Beginning. Since the Director S.S.Rajamouli has given the prequel with many suspense yet to be solved, audience has gained extra interest in solving the mystery and they have also come up with many fan theories to answer the question on ‘Why loyal servant Kattappa has killed his own King Baahubali behind his back?’. However, the wait is almost over and it was confirmed that Director has taken extra care in not releasing the movie plot, by directing three different climax for the upcoming mega budget movie. 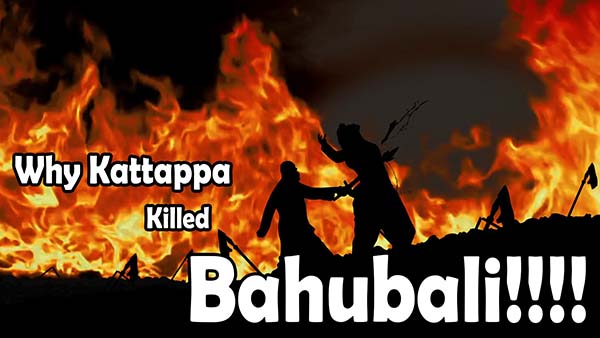 Even after taking special care about the movie plot, it is rumoured that the story of the sequel has been leaked on social media and already circulating the internet world virally. The question ‘Why Kattappa killed Baahubali?’, which will be the bottom line for the movie Baahubali: The Conclusion has been answered. According to a source, they have confirmed that the answers are circulating the internet through the famous messenger ‘WhatsApp’. Since the excitement of the fans after the first movie Baahubali: The Beginning, which left us with many unanswered questions, has become uncontrollable. And many people came up with their own storyline to answer those unanswered questions. However, none of them looked convincing and created a longing in fans to know the story as soon as possible.

Anyway some of them came up with a more convincing storyline that has been circulating the internet arena. The leaked story of Baahubali: The Conclusion is as follows, Kattappa is a loyal army chief of the Kingdom of Mahishmati. Not just Kattappa, the people born in Mahishmati, are bound to be loyal to the Mahishmati Royals.

Once Baahubali becomes the emperor of Mahishmati after saving it from a foe attack, he falls in love with Devsena. However, he is not the only one who falls in love with the beautiful princess, Bhallala Deva, also falls in love with her beauty. To avoid the conflict between her sons, Rajamata Sivagami, comes up with a condition. One who marries Devasena will be exiled from their Kingdom and they have to lead lives on their own. Baahubali agrees to this condition and leaves the kingdom to marry Devasena.

As soon as, Baahubali leaves Mahishmati and Bhallala Deva becomes the king and their kingdom comes under attack by the same Kalakeya troops. This situation forces Baahubali to return to his kingdom and save it from destruction, which sparks fear in Bhallala Deva who thinks, Rajamata Sivagami will again ask Baahubali to rule the Mahishmati Kingdom. This makes him order, Kattappa during the war to kill Baahubali and also obeyed by Kattappa, as he is always bound to obey his King’s order.

However, we have to wait till 28th April, 2017, to know if this is in fact the storyline of the much awaited movie Baahubali: The Conclusion. Prabhas, Anushka Shetty, Rana Daggubati, Sathyaraj are playing the key roles in the upcoming movie.